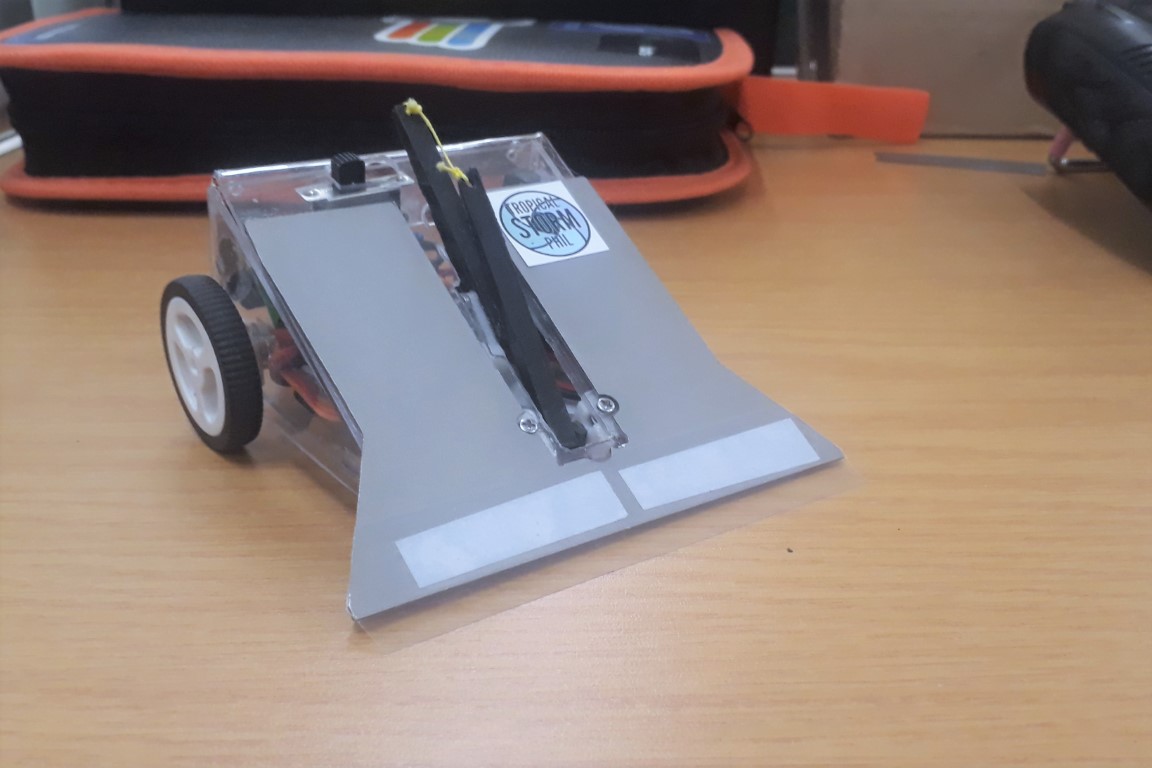 The real Tropical Storm Phil was Ryan’s first solo venture and is, at the time of writing, the most successful robot to carry the Spinnerproof name. This information clearly isn’t important enough to be one of the first things said about the robot, but here we are.

The robot is, to all intents and purposes, v0.3 built from better materials. It utilises the same set of components and an extremely similar (albeit mirrored) internal layout, but does so making use of the extra internal space granted by using a material which isn’t 5mm thick. Rather than the original foamboard, the main chassis is constructed from 1.5mm polycarbonate and this is augmented with a large 1mm titanium wedge which covers almost the entire front/top of the robot. The main body was built using a combination of bending and gluing the polycarbonate: the top panel and baseplate are both bent from single pieces for strength, whilst the side panels (which are unlikely to take any significant hits) are glued in place.

There are two other significant changes from the prototype version:

Wheels: v1 uses BBB’s 34mm wheels rather than Nuts & Bots’ 25mm wheels in order to make positioning the motors in a way which gave the wheels clearance all the way around the rear of the robot easier. As a result of the larger wheels, the robot was significantly faster and had a tendency to wheelie when accelerating quickly. To combat this, approximately 20g of ballast was added to the underside of the robot for AWS61.

The weapon mechanism: the original was built in such a way that the weapon’s pivot was half way up the wedge, making it difficult to get far enough under an opponent to flip it. This was a result of mounting the arm directly on the servo, and solving the problem required building a two-stage flipper mechanism where the servo was mounted behind the pivot. This was fiddly and annoying, but worthwhile as the robot managed to achieve at least one proper flip in its 5 fights.

As discussed in Episode 71, the robot was built with the following, limited selection of tools: