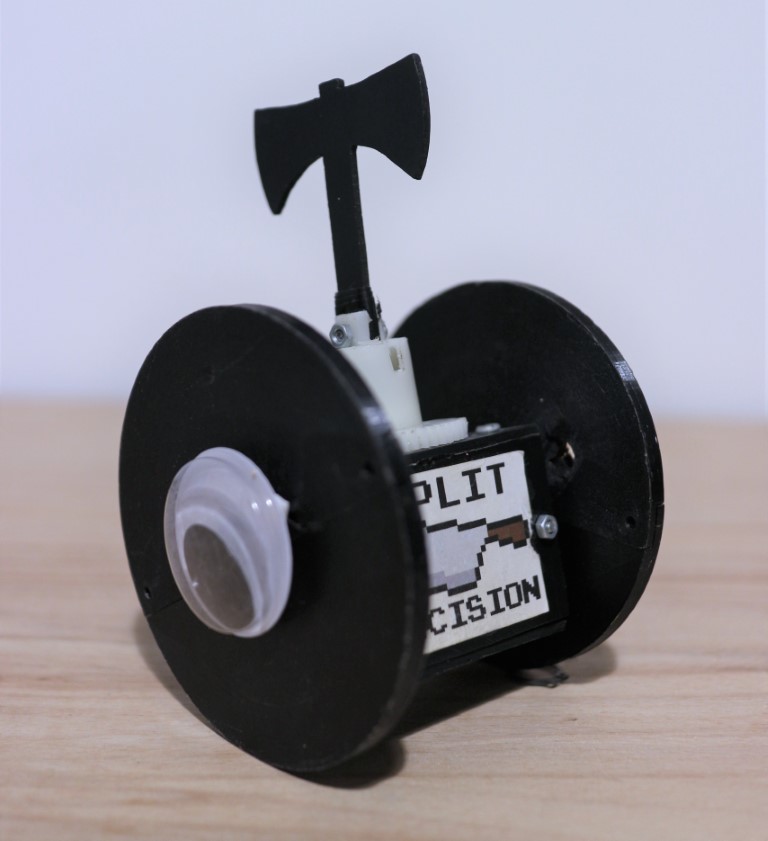 This is it. Where it all began. The genesis of ‘Team Spinnerproof’. Born of a hastily-arranged plan to attend the inaugural RoboNerd and a deep-rooted psychological need to turn up with a robot in order to feel like we had a right to be there, Split Decision would be an antweight were it not for the infernal 4” Cube rule. Fortunately, RoboNerd was a relaxed (some might say enlightened) event where the cube rule was relaxed, allowing this 150g hero to be born.

Split Decision is a fairly standard 2WD thwackbot which is heavily inspired by Gabriel. It is powered by two standard N20 motors running off of a NanoTwo Rx/ESC/box of magic, however its massive wheels and lack of traction cause the robot to be unreasonably fast and largely uncontrollable. The whole robot is heavily armoured with 3mm ABS, which is secured to two hand-moulded thermoplastic bulkheads, and was originally armed with an unreasonably long and sharp scalpel. For safety/comedy reasons, this was replaced with a tiny version of Hello There!‘s hammer for its appearance on Bugglebots, and it’s remained in place ever since.

Split Decision has proven to be unreasonably robust, surviving a lengthy stint in the Robonerd arena with a number of much larger robots and two competitive Beetleweight fights where it has acted as a minibot.