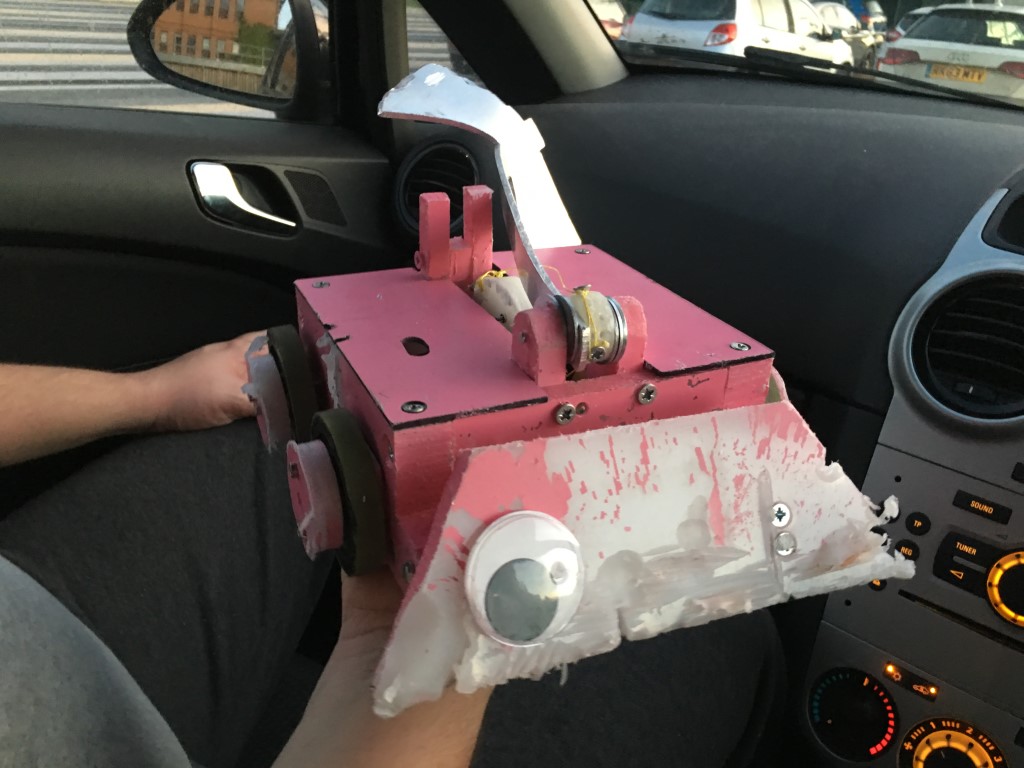 Hello There! is our first, and currently our best, beetleweight. The robot was designed and built for Bugglebots series 2 and was, for reasons we still don’t quite understand, accepted! It competed in Heat 4 of the 2019 series.

The robot was designed with a focus on durability and manoeuvrability rather than weapon power. The chassis was based around two 20mm HDPE frame rails, onto which essentially every component was in some way mounted. The rest of the body was constructed from 10mm HDPE, including the wedge, with top and bottom panels built from 3mm ABS and Polypropylene respectively.

Unusually, the hammer was powered by a servo. We took this approach in order to simplify the control of the weapon, utilising the fine positional control you get from a servo to prevent overswinging the weapon. In hindsight, this was unnecessary. Because the servo was quite slow but very torquey (30kg/cm, 0.17sec/60deg), we utilised a pair of pulleys and a lot of high-strength braided fishing line to achieve a rough 1:3 gearing between the servo and the weapon itself. This gearing, combined with some selective blindness when it came to the servo’s preferred voltage, gave us the combination of enough torque to self right and enough speed for a pleasing swing.

Hello There!‘s drive was powered by two 12v, 1000rpm gearmotors from eBay – a common drive setup for UK beetles which is both cost-effective and reliable – each initially controlled by a Vex 19 ESC but later controlled together by a single, unbranded dual ESC. Each motor powered two wheels, the front wheel being directly driven with a simple o-ring pulley to drive the rear. The rear wheels were very simply mounted on two M4 bolts – like many things on the robot, this was originally a temporary solution which became permanent – and the drive pulleys were very simply manufactured using a hole saw on a cordless drill.

In theory, Hello There! has a number of defensive configurations:

In battle, Hello There! proved to be extremely durable and generally a lot of fun to fight with. The HDPE wedge causes spinners to easily launch the robot very high in the air and the weapon, when it works, is an effective SRiMech. The exposed wheels have been a minor weakness with lots of drive belts becoming damaged, but the drive pulleys largely protect the wheels themselves from major damage. The weapon, whilst underpowered, allows the robot to be active and involved under almost any circumstances and the axe itself has taken some delightful damage from spinners.

In building Hello There!, we relied heavily upon the wonderful Bristol Bot Builders’ parts list as a way to find appropriately sized and reasonably priced components. We would encourage any prospective UK-based builders to use their guides as a starting point for their first build and, if possible, to support them by making use of their shop.